The crowd funding page received backing from many online social media accounts, as well as both local and national newspapers. The money raised is being used to fund a skilled community gardener that will support residents in transforming the street into a green haven.

Daubeney Fields Forever, a community group in Hackney, London was set up to keep the neighbourhood green, clean and friendly.

The team are now working on another initiative 10x Greener with other partners and the local residents which aims to green up and clean up the neighbourhood.

The 10x Greener project was set up in February by Daniel Raven Ellison, founder of the London National Park City initiative. It is funded by Friends of the Earth, was featured in the Sunday Mirror in May and is being filmed for a BBC National History Unit series this year.

How did the community group get started?

Three years ago, Gerry Tisser one of the backers of the London National Park City and Daniel envisioned  creating a green city that was inspirational. So Daniel reached out to Friends of the Earth to run a pilot project to support residents of a small neighbourhood to make their streets as green and attractive as possible - and got the funding!

The community garden sits on the boundary between the Clapton Park Estate and the streets of privately-owned terraced housing. Our garden has transformed an abandoned car park into a green oasis and has reworked a number of ‘industrial’ elements into innovative green features. The garden has helped to bring people together from across these communities.

A local charity called ecoActive has also worked in the neighbourhood for many years. ecoActive runs environmental and nature-based projects and activities for local schoolchildren and families. In addition, Daubeney Road has a Forest School in a children’s centre and an energetic primary school which is encouraging outdoor learning.

The Daubeney Road neighbourhood has a fantastic community spirit, which has grown over the years through street parties, street Playing Out events, Fun Days on the local park and active local social media groups.

The community was keen to engage in this project to see how many grey spaces we could fill with life. We hope to inspire other streets across the UK to be greener too.

The 10x Greener project has... 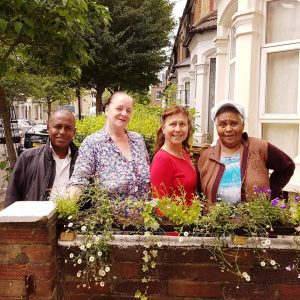